The word vulnerability has cropped up a number of times in this blog and elsewhere in the literature on trust.  For example, the CIPD in a recent report stated:

As we know, trusting others means accepting vulnerability (Rousseau et al 1998). Human leaders recognise that in order to build trust and create sustainable trust environments, they need to share some of that vulnerability with their followers in order to signal to them their trustworthiness.

I agree, but there is a shadow side that is worth exploring that has implications for trust itself.  On the one hand vulnerability could be seen as a ‘sugary’ term that implies goodness. I will put forward another view of vulnerability, one that is enmeshed in the goings-on of the workplace, which can be toxic and corrupt. The picture I will paint is of a fictitious police department in a small provincial city. Here there is a young moral police officer who is keen to progress through the ranks. She is new to the area and is keen to fit in. The team she is joining is longstanding and some of the members have worked with each other for many years. She is accepted politely but cautiously. Over the years it has become customary to engage in certain activities that are against rules such as clocking more overtime than actually took place and taking as much sickness leave as possible. Everyone in the department knows this goes on, even the senior managers, who did this when they were younger.

To be trusted, what does the young officer need to do? Perhaps to indulge in one of the practices she sees going on? As soon as this happens she becomes enmeshed in a web of longstanding mutual culpability. At this point she can be trusted to know more secrets, perhaps involving more serious activities.  Over a period of time this once moral and honest person becomes a part of the criminality she was so keen to fight. And in a few years when a new member of the team joins she talks with them discreetly as to ‘how things are done around here’.

The point I’m making is that vulnerability is neutral, it is neither good nor bad. It only becomes so in practice.  And the same goes for trust. 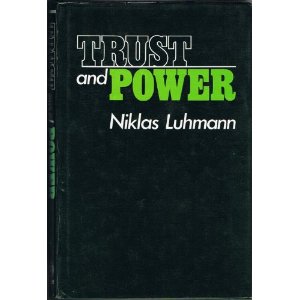 Trust is written about in a number of ways.  Here I would like to discuss two: one being less direct, but sharper; the other more direct, but less ‘knowing’.  In this latter case a number of authors tackle trust head on (Luhmann, 1979; Möllering, 2006), treating it theoretically, discussing it in relation to power, reason, habit and how we think about our actions. The argument makes sense intellectually, but it is hard to make a connection to practice or experience.  In other words there is little ‘knowing’ in the practical sense.  Whereas when I read ethnographic accounts (Bloch, 2013; Venkatesh, 2008) of lives lived, trust is rarely explicitly mentioned, but it is there as people describe how they get on with each other, particularly when the stakes are high.  And in doing so one partially lives that journey too, even second guessing what might come.  Take Venkatesh’s story for instance, of a graduate student who wants to research gangland culture in Chicago.  It is a story that spans years as the student gains the trust of the gang leader JT. A trusting relationship develops between two very different people and extends to the wider gangland network and their community.  It is a relationship that is shaky, tested and dangerous.  Though the word trust is rarely used, it is the underpinning.

Perhaps trust is like seeing something from the corner of your eye: there it is clear and makes sense.  As soon as you turn to look directly at it, any clarity disappears. And in trying to gain more understanding it takes on a different quality, less of experience and practice, more of intellect and theory. 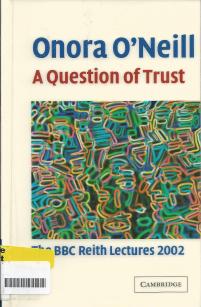 In her 2002 Reith Lectures, Onora O’Neill finds no convincing evidence to diagnose a crisis of trust in our society today. But she does see massive evidence of a culture of suspicion. And she has her own suspicions. If we are to avoid a real crisis of trust, she suggests, “we need to think less about accountability through micro-management and control, and more about good governance; less about transparency and more about limiting deception” (page 99).

O’Neill also points out that, in the information age, “communication is often between strangers and one-way” (page 84), so we need to find ways of checking who is providing the information and whether they are trustworthy.